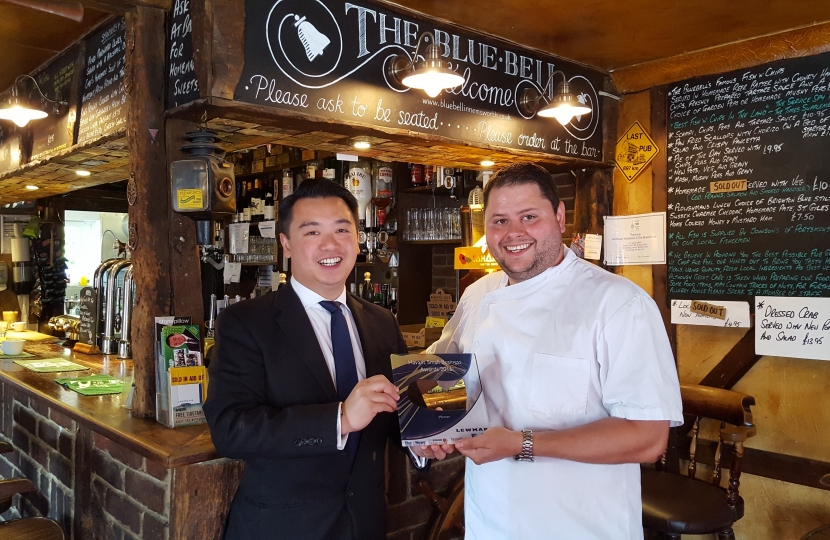 Havant MP Alan Mak has praised Emsworth’s Blue Bell Inn for its contribution to the community, as part of his latest tour of the winners and finalists of the Havant Small Business Awards.

The pub on Emsworth’s historic quayside is a favourite of many locals and it is starting to gain a popular following as one of the top pubs in the wider south Hampshire region.

It scooped the best pub award at Alan Mak’s inaugural Havant Small Business Awards in April run in partnership with The News, with the MP describing it as one of his favourite local pubs.

Owner Giles Babb has focused on making top food, with the pub coming a long way from its early history as a refuge for weary fishermen after a hard day out on the water.

Emsworth was at one point world famous for its oysters and it was regarded as having England’s largest fleet. However, the trade collapsed almost overnight following fears the oysters were contaminated with sewage-borne diseases – infamously the Dean of Winchester died in 1902 after eating contaminated bivalves during a mayoral banquet.

Giles however has been keen to promote the town’s heritage by launching a beef, oyster and Wodehouse ale pie as part of the British Food Fortnight - his recipe was recently featured in the Sunday Telegraph. The Emsworth British Food Fortnight runs from 17 September to 2 October and the special dish will be on offer at the Blue Bell Inn during that time.

The popular festival is set once again to attract thousands of people to the town and Giles has been integral in its organisation through his role as chairman the Emsworth Business Association. The local business group champions Emsworth as a visitor destination, and organises the town’s annual Christmas lights event, Small Business Saturday and a host of smaller events that support the visitor economy.

He said: “It was great to welcome Alan to the Blue Bell Inn, as he has always been a keen supporter of the pub and the Emsworth Business Association. It was an honour to win the best pub prize in the Havant Small Business Awards and nice to be recognised for all the hard work that is done by our staff. Going forward we are excited to welcome visitors to the pub during the Emsworth British Food Fortnight which is shaping up to be another success.”

Mr Mak described the Blue Bell as a worthy winner of the best pub award with its fresh food, local ales and community focus impressing the judges.

He said: “Emsworth’s Blue Bell Inn represents all that is wonderful about the Great British pub. It offers a range of fantastic ales, great food, and is a real community hub. As well as running his pub, Giles has done excellent job  promoting Emsworth’s wider economy through his role as Chairman of the Emsworth Business Association. Giles and his team are a great credit to our area, and worthy winners.”