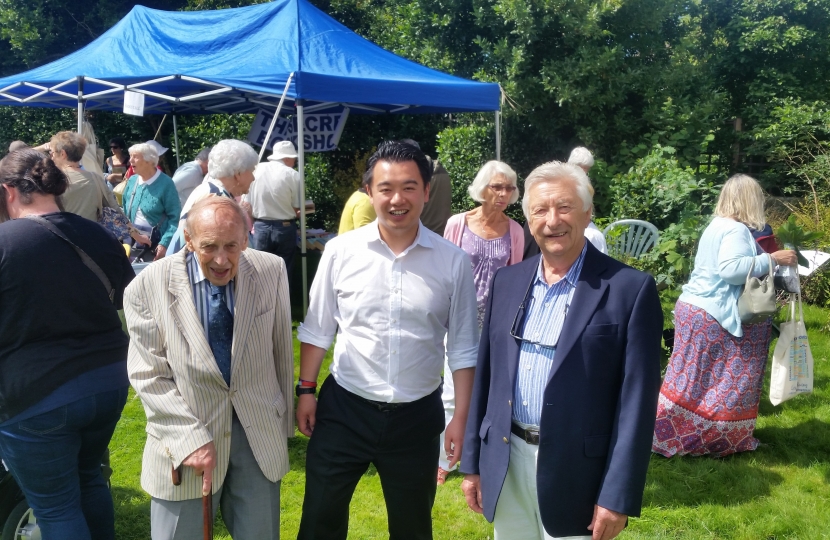 Tea and cakes were on the menu for Havant MP Alan Mak as he helped raise money for The Manor Trust in Bedhampton on Wednesday, August 3.

The fundraising Garden Party raised money for the charity which provides a weekly luncheon club, self-care flats for the elderly and 24hr care home at reasonable prices in the conservation area of Bedhampton and based on an historic Grade 2* listed house 'The Elms'.

The event had a number of stalls running throughout the afternoon generating much needed cash to runs its five apartments at The Elms and its 24hr residential care home, The Lodge.

The Manor Trust helps protect historic buildings from developers while providing accommodation for older people at a much lower cost than other commercial homes. It has a waiting list of people wanting to move into its two properties and to help fund the project it has a number of fundraising events throughout the summer.

Mr Mak had the chance to enjoy the music and take part in the raffle as part of the afternoon’s entertainment.

He said: “The Manor Trust show what can be achieved by residents through hard work and determination. What started as a pipe-dream by Cynthia Hoy and Bernard Stanley in 1967, to save a much-loved building from demolition, has morphed into a charity providing much-needed affordable retirement apartments.

“I was delighted to attend the Garden Party fundraiser, and the Manor Trust is a shining example of what can be offered for people in the community. It is an excellent charity and I thoroughly enjoyed my afternoon at the garden party.”

It comes ahead of a planned Older Persons Information Fair that Mr Mak is hosting at Hayling Island Community Centre on October 14 which is being supported by media partners The News and the Hayling Islander. The event is free and will bring together local charities, businesses, community groups and government agencies that help older people.

Founding trustee Bernard Stanley said: “It was wonderful to welcome Alan Mak to the event which was a great success and helped raise lots of money for the charity.”