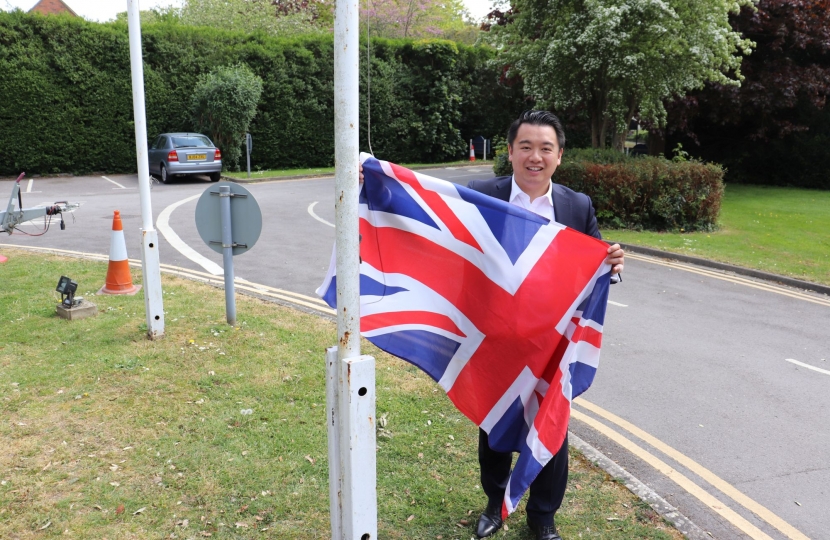 Havant MP Alan Mak has encouraged residents to fly the flag this summer to display their pride in our country and is offering free flags for residents.

The MP hopes that residents can hoist the Union Flag ahead of the 75th anniversary of the D-Day landings on 6 June and the St George’s Flag ahead of England’s sporting summer. In a bumper few months of sporting action England will be hoping for success in the Cricket World Cup on home soil and the UEFA Nations League Finals.

The flag and postage will be sent free to all residents living in the Havant constituency by request and is on a first-come first-served basis.

Alan said he hoped to see flags flying in all corners of the constituency throughout the summer.

He said: “I am proud to be British and I hope that by providing free flags for residents we can put on a strong visual display of our patriotism across the Havant constituency. I look forward to seeing them flying from houses and flagpoles and at some of the important events that are taking place this summer.

“The D-Day 75th Anniversary will be a particularly poignant occasion where the whole country will come together to mark the sacrifices made by Armed Forces in defence of our freedom and liberty. I’m forever grateful to those who gave their lives to defend our country and gave us the opportunity to ensure we can continue flying the flag.”

Alan added: “There will also be a bumper summer of sporting events with the Football Nations League Finals and Cricket World Cup, and like everyone in the country I’ll be rooting for English success on the pitch, so I hope everyone can get behind the players.”

Residents who would like either a Union Flag or a St. George Flag should contact Alan online: www.AlanMak.org.uk/Flag