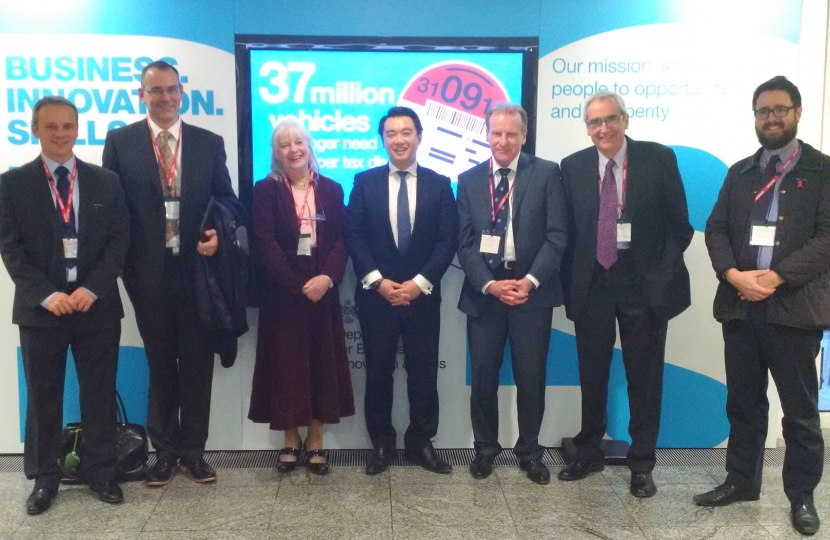 Havant MP Alan Mak has led a delegation of local sixth form college leaders to meet the Education and Skills Minister Nick Boles in Westminster to discuss their future plans.

The meeting on Thursday 3 December 2015 took place a week after the Spending Review committed to protecting sixth form funding, and as the future of local further education is being examined by the Minister’s department.

The meeting was an opportunity for Mak to thank the Minister for protecting the further education budget, and for local education leaders to discuss their own growth plans. The Havant area is currently undergoing an “Area-Based Review” carried out by the Departments for Business and Education in conjunction with the Solent Local Enterprise Partnership.

The aim of the Review is to assess local skills and education needs, and make recommendations about the role of local further education institutions, like sixth form colleges and further education colleges. The Area Based Review is due to report in the first quarter of 2016.

Mak has been lobbying the Departments for Business and Education to protect the post-16 education budget – and reform the funding formula for secondary schools – since his election in May. Both were delivered by the Chancellor in his Autumn Statement and Spending Review on 25 November.

Chancellor George Osborne confirmed that the further education and adults skills budgets would be protected, and not face cuts. This puts the sector on a par with the schools budget (5-16 year olds) which was already protected.

Alan Mak MP said, “Supporting local schools and colleges is a key priority for me because every young person deserves the best start in life. South Downs, Havant College and Oaklands do a great job educating and training our young people, and I was delighted to arrange a meeting with the Minister so they could share their plans for the future with him.”

Mak added, “As local MP with a passion for education, I’ve lobbied the government to protect the further education budget for sixth form and further education colleges since I was elected. The Chancellor has delivered, and this is good news for Havant. Our meeting with the Minister focused on how we now move forward and make the most of the sector’s protected funding and growth opportunities”

Mike Gaston, Principal of South Downs College said, “South Downs is already a regional leader for a wide range of qualifications, including vocational education and apprenticeships. Alan’s meeting was a good opportunity to discuss our ambitious plans with the Minister as the Area-Based Review gets underway.”

John McDougall, Chief Executive of Havant College said, “Alan has supported Havant College since his election, and he knows we are successful and popular with local students. Our meeting with Alan and Nick Boles gave us the chance to share our plans for the future as we evolve to meet local needs.”

Rob Smith, Deputy Head of Sixth Form at Oaklands Catholic School, said “Oaklands has a strong academic track record, and a successful sixth form. Our priority is maintaining our success. We’re delighted that Alan is championing our success in Westminster, including arranging today’s Ministerial meeting.”