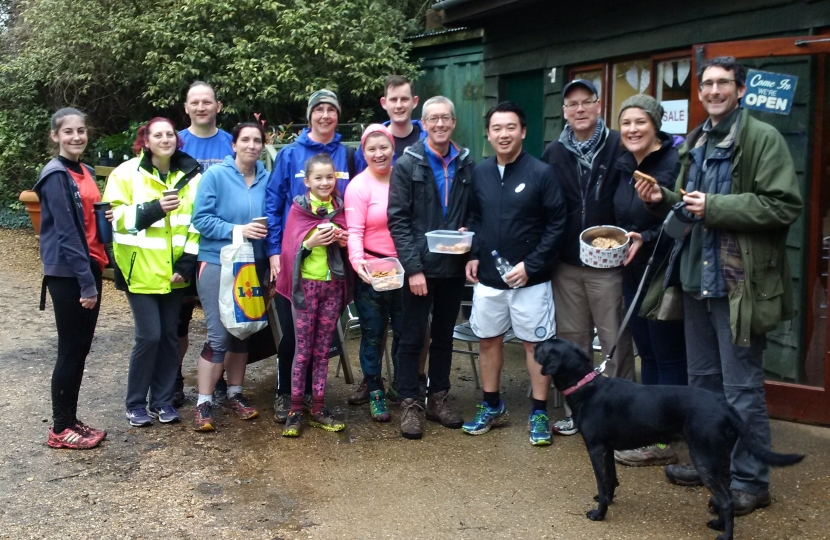 Havant MP Alan Mak has started delivering on his new year’s resolution to get fit by joining local residents for a 5KM run last Saturday 9 January 2016, and showing his support for a growing running phenomenon.

“Parkrun” is a volunteer-led running initiative expanding across the country, and Havant was the first town in the Portsmouth area to embrace it by organising its own Parkrun at Staunton Country Park near Leigh Park.

Parkrun is a free weekly 5KM event for runners of all standards and ages. They take place in 379 locations across the UK.

The Havant event typically attracts around 200-250 runners per week from children to pensioners, as well as young professionals and families. Waterlooville resident and software engineer Dave Williams organises the Havant event.

Parkrun’s success is based on its social nature, with runners keen to build a community based on their shared interest not just racing each other. Many runners build new friendships through staying for post-run coffee and cakes at Parkrun “CakeClub” held at the cafe in Staunton Country Park.

Dave Williams, Havant parkrun Event Director, said, “Havant parkrun is going from strength to strength, and a popular way for residents to get fit and have fun every week. It's a real community ‎event, and we're delighted Alan has completed the 5k run and experienced it for himself”

Alan Mak MP said, “Completing Havant Parkrun’s 5KM course was an enjoyable and energetic start to the year! I had a great time meeting the other runners and well done to the parkrun event team for their excellent work. We’re lucky to have Parkrun in Havant, and I encourage others to try it for themselves!” ‎

Mak added, “Recent rainfall meant the course was very muddy, but Staunton Country Park is a beautiful place to run in, and offers a range of challenges for runners of all abilities. Parkrun gets people together from all walks of life, and is great for our local community.”

Parkruns opened in Lee-on-Solent last year, and new Parkruns are planned for across the Solent region this year.

Supporting community projects and local sports groups is a key priority for Mak, a keen sportsman. Mak has already become Vice President of Havant Rugby Club, and is also hoping to play for Havant Hockey Club.