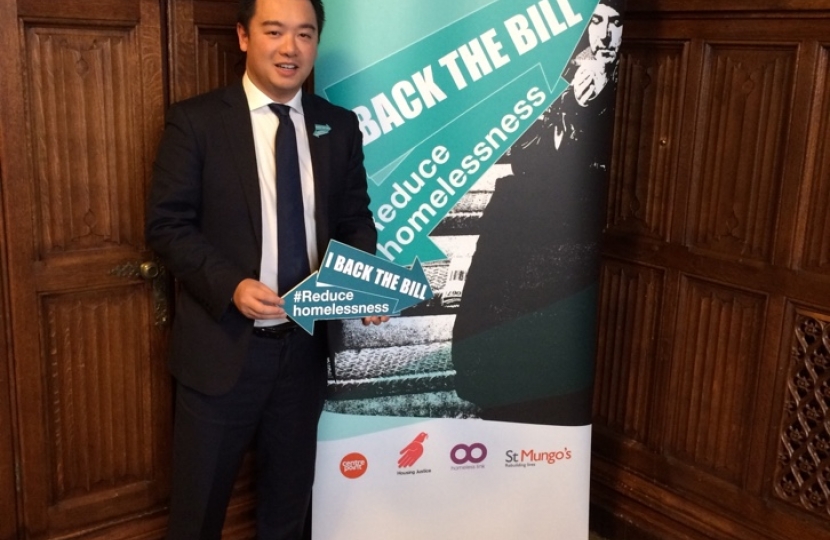 Havant MP Alan Mak helped pass an historic homelessness bill in the House of Commons, bringing it one step closer to becoming law.

The Homelessness Reduction Bill places extra duties on councils, including Havant Borough Council, to intervene at an earlier stage with households who are at risk of homelessness, provide more detailed advice on housing options for those at risk, and make it easier for applicants to appeal a decision against them.

After passing the final hurdle in the House of Commons, it now moves to the Lords to get final approval before it can become law.

As a Private Members Bill, a less common form of legislation that is written by a backbench MP, it took place on a Friday, meaning Mr Mak had to switch his usual constituency day to make the vote. The Bill has been backed by the Government, the Opposition and the Communities and Local Government Select Committee, as well as the homelessness charity Crisis.

Mr Mak said: “I am proud to have played my part in getting this much needed reform one step closer to being a law.  Nobody should be forced to sleep rough because they can’t get the help they need. Thankfully across Havant homelessness is low, but we cannot be complacent nationally. That’s why I’m backing the Homelessness Reduction Bill, and I urge my colleagues in the House of Lords to give it the same backing that MPs have in the Commons.”

Crisis Chief Executive Jon Sparkes said: “This is a landmark moment, and we’d like to thank Alan Mak for backing this historic bill and successfully getting it through the Commons. We still have a way to go in the Lords before it becomes law, but we’ll be there every step of the way to help make sure it happens.”