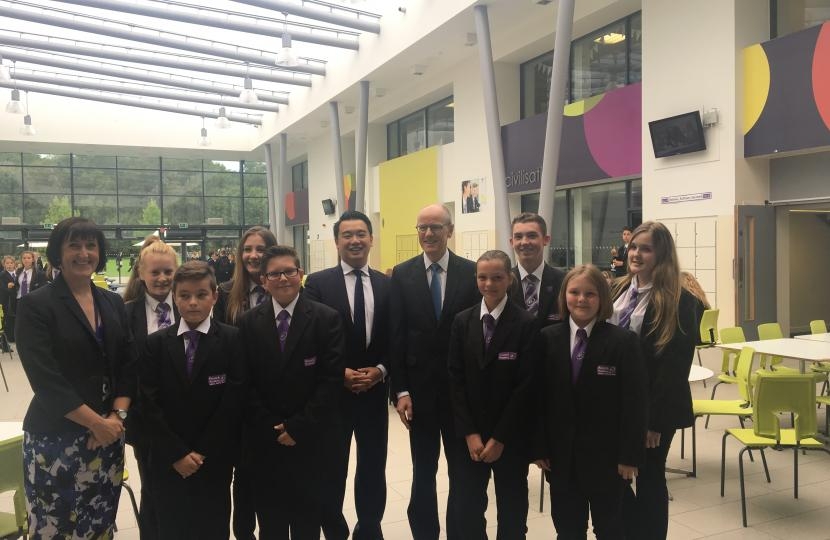 Havant MP Alan Mak says he will continue his campaign for fairer school funding after the announcement of the draft new national school funding formula by the Government.

The proposals are currently out for public consultation, and despite no final decision being made, Mr Mak is keeping up the pressure on Government ministers and representing the interests of Havant's schools and colleges.

The Havant MP said he was concerned that some schools locally appeared to experience funding reductions on paper under the draft formula, but emphasised that Ministers had indicated changes to the draft national funding formula are likely before it is finalised and used in practice. The Government has said it will take into account consultation responses and representations from MPs when the final formula is announced.

To make the case for Havant schools, Mr Mak has written to, and will meet, the Minister of State for Schools Nick Gibb, having already met the Secretary of State for Education Justine Greening to make representations on behalf of Havant's schools.

Alan Mak MP will be responding formally to the Department for Education's public consultation on the draft funding formula and has written to all local primary and secondary schools encouraging them to do the same. In Westminster Mr Mak will continue to lead Hampshire's county-wide fairer funding campaign in his role as a Vice Chairman of the Hampshire All-Party Parliamentary Group (APPG), and the APPG’s Lead for Education.

Mr Mak said: “I am aware that some schools in the Havant constituency may experience reduced funding under the national funding formula proposals, largely due to possible changes in the way deprivation is measured and funded, and changes in the ‘per pupil’ funding amount.

“Therefore, although the public consultation is still on-going, I am actively expressing my deep concern on this issue to the Government, and have encouraged all local schools to do the same. Responding to the consultation is the most effective action we can take at this stage.”

Since becoming our MP in May 2015, Mr Mak has been a strong, active supporter of local schools and students, having previously served as a state primary school governor for more than five years and as the President & Trustee of an award-winning children’s school breakfast charity.

He added: “I have visited every secondary school and college in the constituency - some on numerous occasions - as well as nearly every primary school, and I continue to engage with them. I have launched, and chair, the Havant Education Leaders’ Forum (HELF) which brings together Havant’s secondary school and college headteachers and principals each term to discuss local education issues, and arranged meetings with the Minister of State for Schools, Nick Gibb MP and Councillor Peter Edgar, HCC Executive Member for Education, so our school and college leaders have the opportunity to engage with senior decision-makers directly. These meetings have been well-received."

“Moving forward I plan to continue working closely with local schools in the constituency so we give our young people the best possible start in life.”