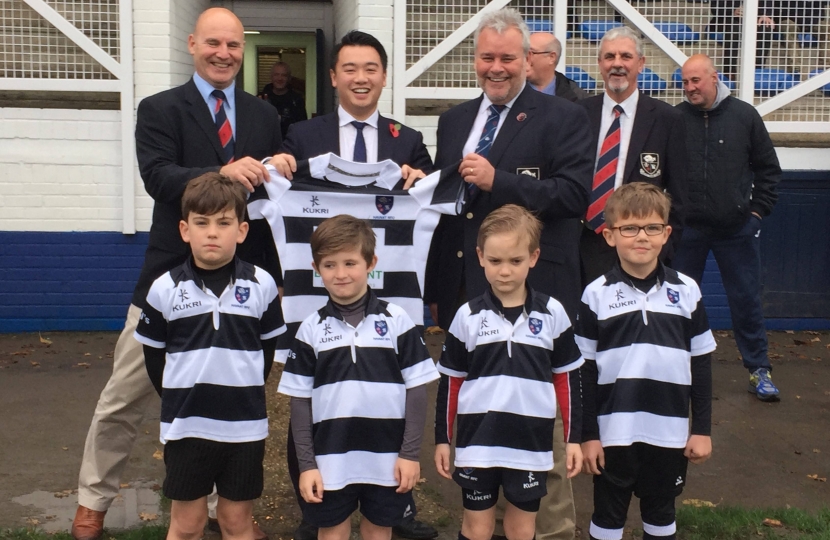 Havant Rugby Club has appointed local MP Alan Mak as a new Vice President as the club steps up its expansion plans.

Mak accepted the honorary position at the Club's Hooks Lane Ground, Bedhampton on Saturday 7 November 2015, and was presented with a ‎club shirt by President Nigel Campkin and Chairman John Mangnall before the home game against Charlton Park from south London.

The matchday ballboys from local schools also joined the presentation.

Alan Mak MP said, "‎Supporting local sports clubs and community organisations is a top priority for me as local MP. Havant Rugby Club are a real community club, involving parents, schools and local business to make rugby fun and accessible for a growing audience. I'm proud to be their new Vice President, and I'm committed to supporting their growth and success in the future"

Mak added, "I'm a longstanding rugby fan and the Rugby World Cup has boosted ‎interested in the game locally, so I look forward to seeing rising crowds at Havant's home matches, and Nigel may even persuade me to make a few cameo appearances for the casual rugby team when time allows!"

"Alan has been a strong supporter of the Club for the last year, and we're delighted he's now a Vice President and season ticket holder. Alan's passion for the local community means we can rely on him as one of our biggest fans! Havant RFC is successful on and off the field, and we're delighted that our local MP is backing us 100% as rugby's popularity grows"

Havant Rugby Club is one of the Solent region's largest and most successful clubs and won the Hampshire Cup this year beating local rivals Gosport.

The Club also has ambitious growth plans, and have submitted an application to Havant Borough Council to expand the clubhouse, build a new events space and host of new nursery business which will increase revenue.

The Club fields a range of men's and women's teams, catering for all standards, with the men's first team playing in the competitive London South League 1.

A range of local businesses sponsor the club, including Havant-based office space provider Basepoint, who act as main shirt sponsor.