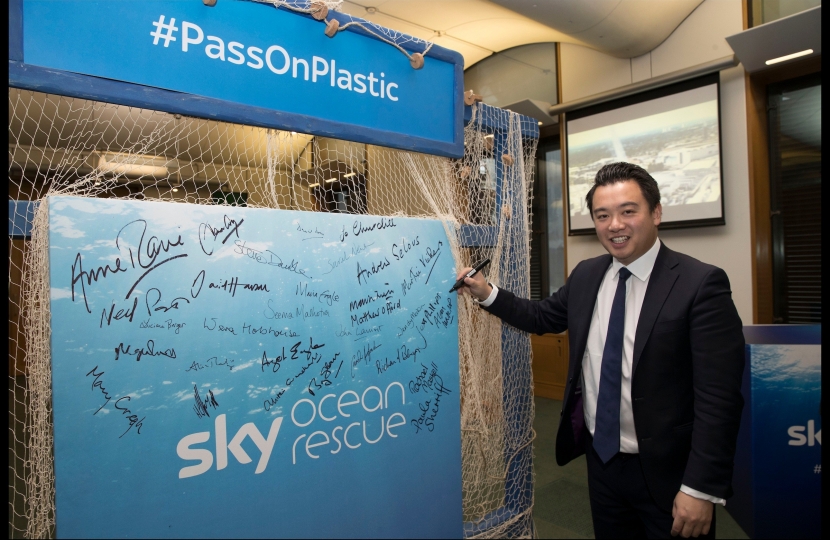 Havant MP Alan Mak has pledged to reduce his use of harmful single-use plastics for Lent, joining a group of more than 40 other Conservative MPs taking up the challenge. The aim is to raise awareness about the difficulties consumers face in going plastic free in everyday life.

Joining Alan will be 41 Conservative MPs, including the Secretary of State for Environment, Food & Rural Affairs, Michael Gove, the Business Secretary, Greg Clark, two former environment secretaries and 11 other government ministers. Pledges include cutting down on the use of plastic water bottles, using refillable coffee cups, avoiding using plastic cutlery, and buying loose fruit and vegetables free from plastic packaging.

The campaign launches after the Government unveiled its 25 year plan for improving the environment last month, outlining the ways in which government will work with communities and businesses to leave the environment in a better state for future generations.

At the launch, the Prime Minister spoke of one of the great environmental scourges of our time, as single-use plastics can end up being ingested by dozens of species of marine wildlife and polluting our rivers, seas and oceans. One million birds, and over 100,000 other sea mammals and turtles die every year from eating and getting tangled in plastic waste.

After the 40 day challenge, MPs will be inviting plastics manufacturers and businesses to a round table to discuss their experiences and see if more can be done to reduce our reliance on plastic.

Launching the campaign, Alan said: “Like millions of people around the country, watching Blue Planet I was shocked by the damage that throwaway plastics are causing to our oceans and I’m determined to take action by reducing the number of plastics I use. I know this is going to be hard but if each of us does a small bit to cut down on our single-use plastic, then together we can help make a real difference, and become more informed about the plastics debate.”