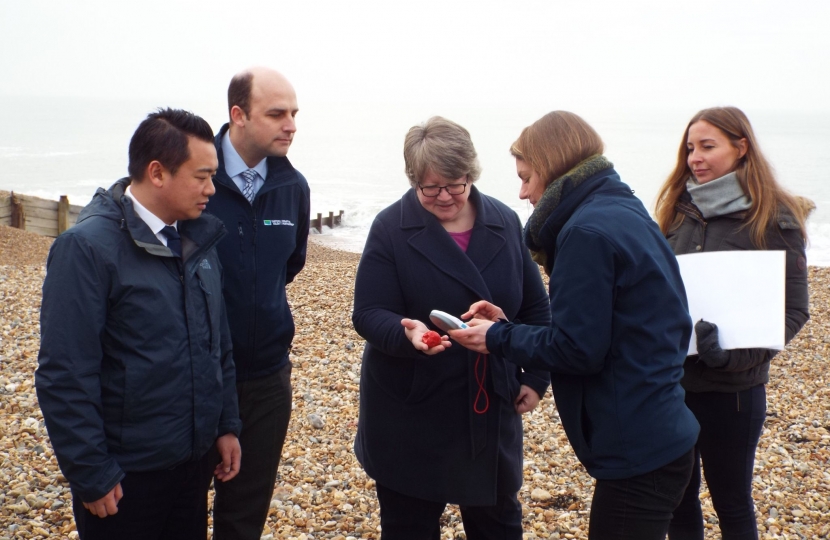 The ESCP is a coalition of local specialist coastal officers and engineers managing the Solent coastline as part of a partnership between Havant Borough Council and neighouring authorities. The Minister, whose portfolio includes flood defence, heard how innovative solutions are being used by the ESCP as a way of protecting Hayling from flooding.

This includes technology such as smart pebbles, which enable the organisation to track the movement of sediment along the beach, as well as laser scanning to create a 3D map of the coastline.

Following the visit, Alan praised the work done by the ESCP in making sure our coastlines are better defended against flooding and the rich environment of the coast is protected.

Alan said: ‘’Highlighting local success stories is an important part of my work as local MP, so I was pleased to show the Minister the innovative work being done by the ESCP and Havant Borough Council making sure those living on Hayling Island are protected from flooding. I know she was impressed by the work being done on Hayling Island to find innovative solutions to improving our flood defences.”

Lyall Cairns, Head of Coastal Partnership, said: “We recognise that coastal management issues aren't exclusive to Local Authority boundaries, and that's why by sharing the resources of the four Local Authorities, we're able to take on more projects and deliver a service with greater efficiencies, whilst ensuring public service excellence for our coastal communities.”