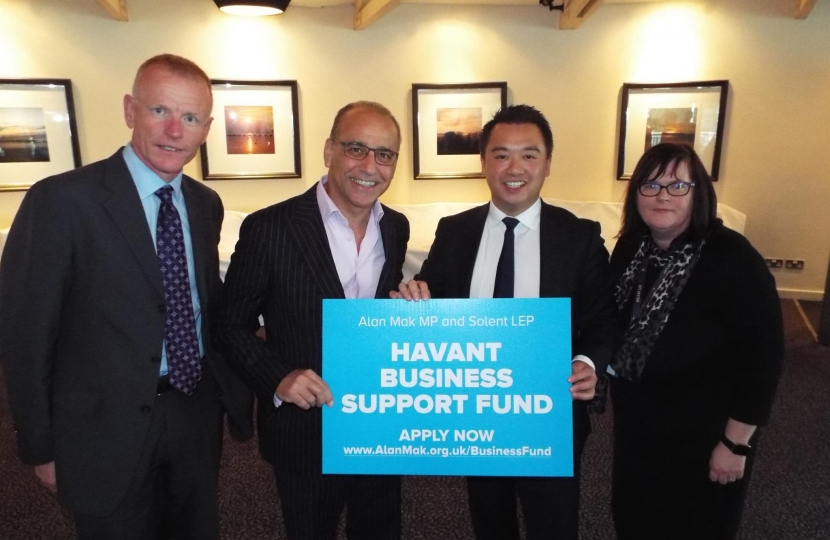 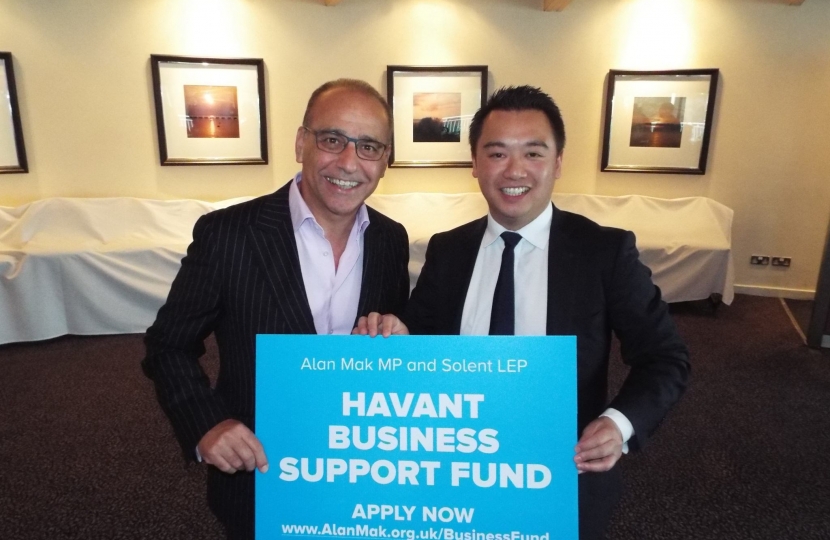 TV Dragon and entrepreneur Theo Paphitis has joined forces with the local MP to relaunch the Havant Business Support Fund for its second year.

The £100,000 fund was started by Havant MP Alan Mak with backing from the Solent Local Enterprise Partnership (LEP) and funding from central Government. Designed to support budding entrepreneurs looking to start a business. It also supports existing business owners from across Havant, looking to grow by developing new products or services, and has proved a hit in its first year.

Supporting a number of local firms it has resulted in almost half a million pounds worth of investment into the local economy. In total, the investment is forecast to secure 24 jobs at the three firms awarded funding so far.

The money has been used to invest in new equipment such as machinery, with the new funding resulting in an additional investment of over £360,000 into supported projects.

During a visit to Langstone Hotel on Hayling Island to meet with local business owners, Paphitis praised the Fund and encouraged other local residents to apply for funding to help them start or grow a business.

Theo Paphitis is one of Britain’s leading business figures, and he owns leading retailers Ryman, Robert Dyas and lingerie chain Boux Avenue. He was one of the inaugural judges on the hit BBC series Dragon’s Den and appeared in nine series.

Theo Paphitis, also the incoming Chancellor of Solent University in Southampton, said: “I was delighted to re-launch Alan’s hugely successful Havant Business Support Fund for its second consecutive year. I know from personal experience on Dragons’ Den how valuable funding is when starting or growing a business. Alan and the Solent LEP are working together to provide vital investment into the local area and I encourage anyone interested to apply.”

One of the businesses that has benefitted from the funding is New Lane-based manufacturer Straightpoint. A world leading exporter of industrial weighing equipment, Straightpoint has used the money to expand its site and purchase machinery which allows it to manufacture its products from start to finish.

Growing at 20 per cent a year, the firm has taken on three new employees and an apprentice as a direct result of the investment.

Havant MP Alan Mak said: “Backing our local economy and helping residents is my top priority as MP, and Straightpoint’s new jobs and growth shows why I wanted to start the Business Support Fund. With a small amount of investment into new machinery the business has created new jobs, taken on more work, and delivers more wealth into our local economy. Having run my own business I know that often the only thing holding back a good idea is the right investment, which is where my Fund can help. In the second year of the Fund, I want more residents to apply so we can turn great ideas into reality.”

Businesses can apply for between £10,000 and £75,000 from the fund to contribute towards projects that will unlock additional investment, improve business productivity and support local jobs.

Anne-Marie Mountifield, the Chief Executive of the Solent Local Enterprise Partnership, said: “The Solent LEP has invested significantly in the Havant economy through the Solent Growth Deal in recent years, with £4.5m funding unlocking the development at Dunsbury Park, and close to £700,000 invested in the Havant SME business base to create jobs in the area. This includes more than £100,000 invested through the Havant Business Support Fund to date and we are looking forward to building on that initial success by supporting more Havant based SMEs and entrepreneurs in the coming year.”

To find out more about the Havant Growth Fund, including how to apply, click here: www.AlanMak.org.uk/BusinessFund