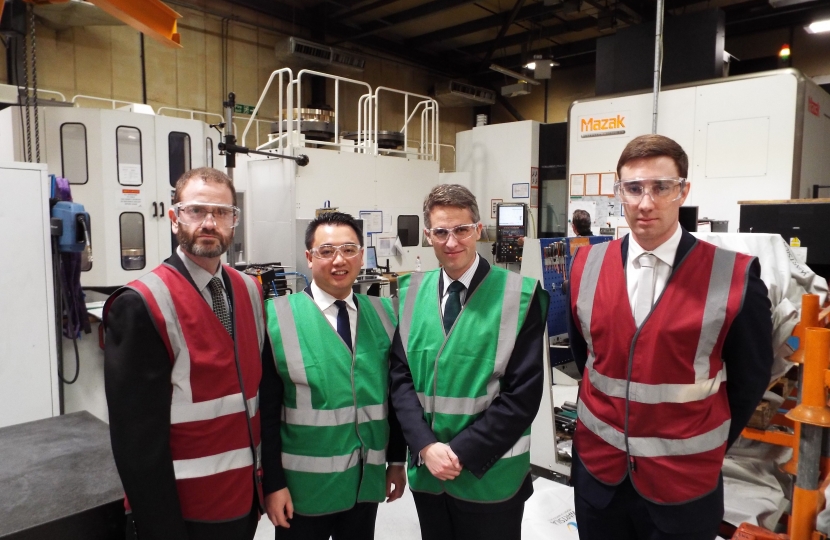 The Defence Secretary has thanked Havant businesses and workers for making a “vital contribution” to the construction of Britain’s two new aircraft carriers.

Gavin Williamson was speaking after being invited to visit local manufacturer Wärtsilä by Havant MP Alan Mak to see the work they have done to help build HMS Queen Elizabeth and HMS Prince of Wales.

Wärtsilä, based on Marples Way in Havant, is one of the country’s leading producers of seals and bearings, which are used in the diesel generators that power both carriers. It is one of three Havant-based businesses that have contributed to the carrier project, with Lockheed Martin building the new F35B joint strike fighter jets that are housed on the vessels and Long and Marshall involved in producing parts for the fighter jet runway.

The 65,000-tonne warships will be based in Portsmouth, with HMS Queen Elizabeth currently undergoing sea trials while HMS Prince of Wales is nearing completion.

Defence Secretary Gavin Williamson said: “The aircraft carrier project is a powerful example of Britain’s world-class engineering and manufacturing industry and is a true statement of our national power. However, their construction would not have been possible without the vital contribution and dedication of workers and suppliers from Havant. The effort and dedication shown at businesses such as Wärtsilä will ensure our country can deliver on our determination to keep fighting alongside our allies in every corner of the globe.”

Alan has been a strong supporter of the carrier project, and also recently met local resident Commander Mark Deller OBE, who has played a key role in ensuring that its jet fighters are ready for service.

Alan Mak MP said: “The contribution of Havant businesses and residents to the carrier project has been immense, from those serving in our serving Armed Forces as Commander Deller has done, or through working in the supply chain at businesses such as Wärtsilä. I was delighted to introduce the Defence Secretary to some of those dedicated individuals and I know he appreciates the hard work and effort displayed by everyone involved in the carrier project.”

Gavin Williamson met with representatives from the Wärtsilä Seals & Bearings business, who commented: “We were delighted to welcome the Defence Secretary to our Havant factory, and we are proud of the part we have played in delivering Britain’s carrier project and our wider work with the Ministry of Defence. Thank you to Alan for inviting him on the visit, and for his continued support for us and the local manufacturing industry.”