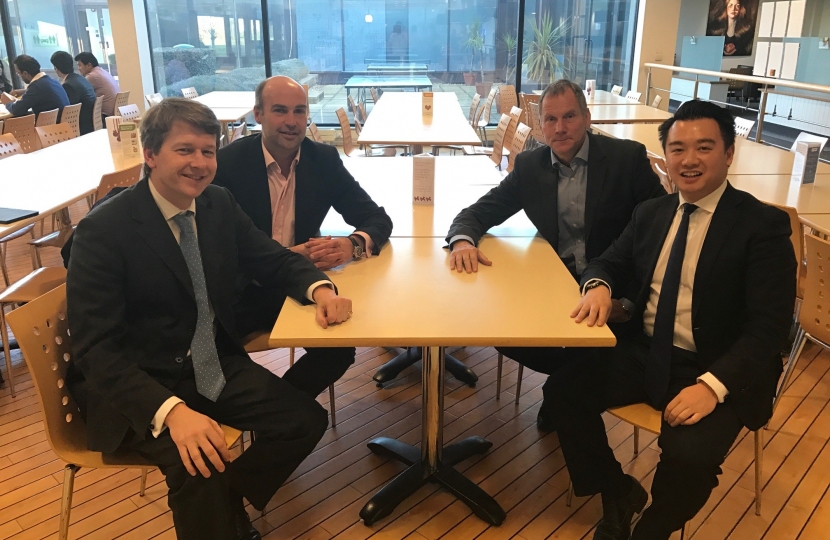 Robin Walker MP, Minister at the new Department for Exiting the European Union spoke at a meeting of local business leaders organised by Mr Mak. The Minister reiterated the Government’s commitment to leaving the European Union following the Referendum result, and answered questions posed by local business figures during a roundtable discussion chaired by the Havant MP.

Havant MP Mr Mak said the local economy was well-placed to overcome the uncertainties posed by Brexit and was fundamentally strong with low unemployment, a skilled workforce, strong transport connections, and an array of successful businesses large and small., including those at Langstone Technology Park. Mr Mak said he invited the new Brexit Minister to Havant so he could hear about how the Brexit decision was impacting firms locally, in one of Mr Walker’s first visits in his new role.

The Government is currently engaging with business leaders up and down the country as part of discussions which will help shape negotiations about the UK’s future relationship with the EU.

Mr Mak said: “Supporting our local economy to sustain prosperity is my top priority as local MP. Brexit is a business issue not just a political process, so I wanted to ensure the views of Havant’s business leaders are heard by Ministers. That’s why I secured a visit by Brexit Minister Robin Walker to Havant so he could see first-hand our thriving business community. The Government is determined to deliver Brexit and I am confident our local economy is strong enough to overcome any uncertainty caused by the referendum result.”

Mr Walker said he was pleased to hear the views of local business owners and says he will take them on-board as the Government finalises its Brexit negotiating strategy.

He added: “Alan Mak is a strong voice for Havant’s residents and the local economy. I was delighted to accept Alan’s invitation to meet local business leaders. Brexit means Brexit and we are going to make a success of it. The Prime Minister and the Government will provide strong leadership as Britain begins negotiations to leave the European Union and forge a new role for ourselves in the world.”

Gary Medlow, Managing Director of Fasset, who attended the meeting with Robin Walker said: “Alan Mak continues to bring outstanding speakers to meet Havant’s business leaders. Robin Walker talked openly about the Brexit vote, what it now means for the UK, and the timetable for exit.”

“At the same time he wanted to hear about the impact the vote had on our respective businesses. Robin spoke fondly of his father Peter Walker MP who worked closely with Margaret Thatcher in the 70s. A good event with an opportunity to question Robin – most enjoyable.”