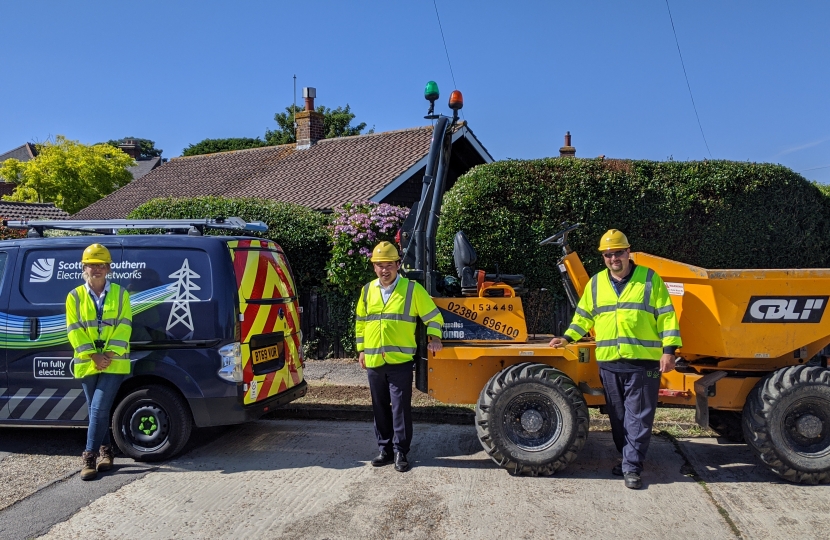 Alan Mak MP met with Scottish and Southern Electricity Networks (SSEN) to discuss how its £1.5m investment in its network infrastructure will support Hayling Island’s net zero ambitions. The Committee on Climate Change (CCC) expect electricity demand to double by 2050 as more and more customers shift to electric vehicles (EV) and heating. SSEN is working to ensure understand the ambitions of the communities it serves, and to enable this transition.

SSEN’s is upgrading and replacing 12 kilometres of high voltage cable which can accommodate future connections and increased demand on the network. The six-month project is expected to keep the island’s infrastructure resilient for decades to come.

Havant’s MP met with SSEN to discuss how electricity use is changing in his constituency. The meeting coincided with the publication of Accelerating a Green Recovery, SSEN’s policy proposals for the UK to deliver the world’s most extensive EV charging network in the world by 2025. Among its proposals is a call for area-wide tenders of public EV charge points, to ensure no communities are left behind in the EV transition.

SSEN, working with sustainable energy experts REGEN, have produced detailed forecasts of Low Carbon Technology take up in its distribution areas, including Havant, where it is expected that EV ownership will increase by at least 11,000% by 2050.

The Hayling Island investment will allow more low-carbon technologies to connect to the network, and SSEN will use a smarter approach to deliver a smarter, flexible and secure energy system.

Alan Mak MP said “I welcome SSEN’s investment in Hayling Island’s critical electricity infrastructure. The UK’s net zero target provides the leadership the climate change challenge demands. Ensuring that opportunities are open to all in Havant will be critical in securing a fair and equitable transition.”

Ian Drummond, SSEN Head of Region said “I’d like to thank Alan for taking the time to discuss this investment, and our net zero ambitions. Our investment programme drives performance improvements and keeps the power flowing as customer demands on the network change.”

“Hayling Island residents have been incredibly welcoming to our engineers, offering ice creams as they worked in hot conditions. It is fantastic that residents understand the need for, and support, these critical works.”

During his visit Alan Mak MP viewed one of the first electric vans that SSEN is trailing in the area. SSE Group currently operates the seventh largest fleet in the UK, and the largest in Scotland. It has joined the Climate Group’s EV100 initiative and are switching 3,500 of business vehicles to electric by 2030.