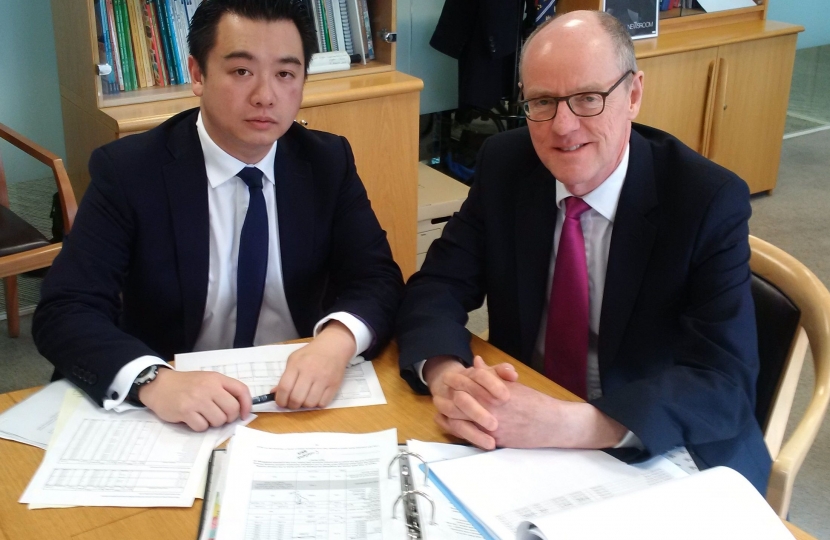 A campaign led by Alan Mak to ensure that no school in the Havant Constituency would be worse off under a new national funding formula is set to end in success, under plans announced in the Conservative Party Manifesto today.

Theresa May has confirmed that if re-elected as Prime Minister she will make sure no school will lose funding, promising a real-terms increase in school funding in England in every year of the next Parliament (2017-2022). Under a draft funding formula schools in Havant had been set to lose around £1million, including Park Community School which was set to lose over £100,000.

It follows months of campaigning from Alan, who as Havant MP wrote to Government Ministers and regularly lobbied Education Secretary Justine Greening and the Schools Minister Nick Gibb. He also brought the Schools Minister to Havant, submitted a response to the fairer funding consultation, and co-ordinated action by the county’s MPs as the Hampshire MPs Group lead on education and skills.

Alan said: “I’ve been working hard over the last two years to ensure that schools in Havant do not lose out as the funding formula is finalised. Having spoken out in Westminster, written to the Chancellor, lobbied the Education Secretary, brought the Schools Minister to Havant, and submitted a formal response to the Department to Education consultation, I am glad that the Prime Minister has listened and will ensure no local school will lose out under any new formula. In fact, schools nationally will see a real-terms increase in funding for every year of the Parliament and that’s great news for our area.”

The Conservative Manifesto has also committed to giving every primary school child a free school breakfast. Before he was first elected as an MP, Alan was President and Trustee of Magic Breakfast, the country’s leading school breakfast charity and has been working in Parliament to increase the roll-out nationwide. He has also been in discussions with a local business to fund a new breakfast club in Leigh Park.

He added: “A healthy breakfast boosts academic achievement and ensuring every primary school child has a meal before school will help improve results. I am delighted the Conservative Manifesto ensures no child starts the day too hungry to learn. It is a vital commitment in an area I have been campaigning on long before I was first elected to Westminster, and will make a real difference.”