Alan Mak wins at prestigious MP of the Year Awards 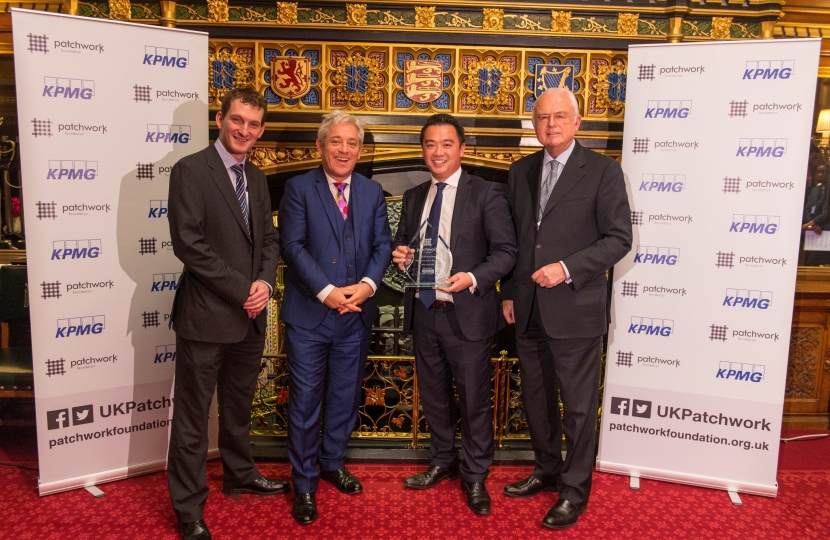 Havant MP Alan Mak has been praised by the Prime Minister for his community work after being named as the Conservative Newcomer of the year at a prestigious MP Awards evening.

The award was presented yesterday (15 November) by the Speaker, John Bercow, at the MP of the Year Awards, organised by the Patchwork Foundation. It recognises MPs who have worked hard for their communities, especially underrepresented communities.

In particular, Alan was singled out for praise by the judges for organising a number of well-attended community events throughout the year, including his Jobs, Apprenticeships and Careers Fair, Older Persons Information Fair and Universities & Oxbridge Conference.

Alan Mak MP said: “I’m honoured to win a New MP of the Year. While I’m not involved in politics to win prizes, I’m delighted to have been chosen for such a prestigious award for my work representing residents locally and in Westminster. My community events have been well supported by local people, and this Award is for our constituency not just me.”

He added: “With Jo Cox as one of the previous winners, it has real poignancy as this year my Havant Older Persons Information Fair supported her Commission on Loneliness’ #Happytochat campaign, tackling social isolation. I’ve also been delighted that other events I’ve organised in my first two years as MP, including my Jobs and Apprenticeships Fair and Universities Conference to encourage more young people to continue their education have been so well supported by the local community. I look forward to repeating all these events in future and continuing to work hard to for everyone living in the Havant constituency. Thank you to all the residents and community groups in my constituency who have supported me.”

All of the nominations for the MP of the Year Awards come from grassroots community organisations. In total more than 130 MPs were nominated across all of the major parties.

The Prime Minister, Theresa May, said: “I would like to congratulate Alan Mak for winning a Patchwork Foundation award and for all their efforts and hard work in encouraging young people from under-represented communities to engage in the political process. I passionately believe that how far you go in life should be about your talents and your hard work and nothing else.”