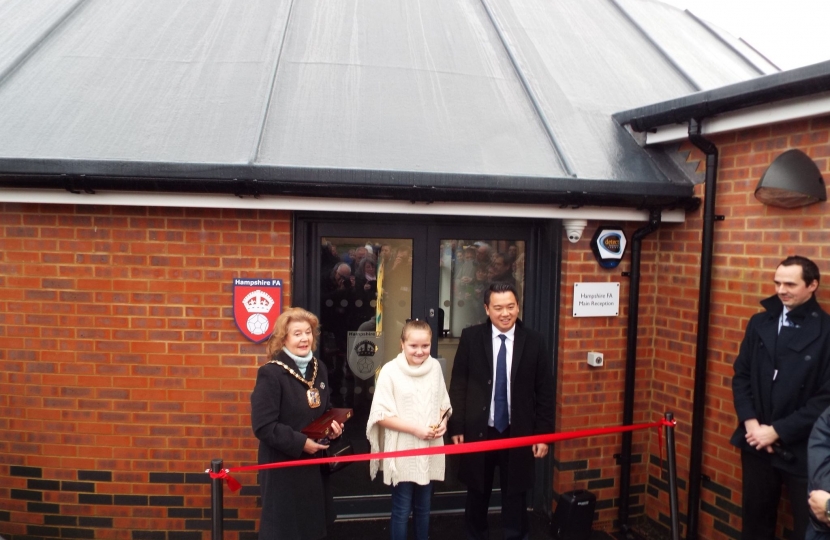 Havant MP Alan Mak helped to officially unveil Havant Borough Council’s new community sports hub in Leigh Park on Saturday (20 January). Its new facilities have been funded by a grant from the Government, via Sport England, through the Premier League & The FA Facilities Fund.

This follows Mr Mak’s visit to the site to present the official cheque for Havant Borough Council’s funding in September 2017. He was joined by local Front Lawn Primary Academy pupil, Olivia Carter, and Cllr. Elaine Shimbart, the Mayor of Havant, to do the honours on the day.

The grant has enabled the Council to replace an existing grass pitch with a state-of-the-art new third generation (3G) artificial grass pitch (AGP). The new playing surface can be used all-year-round, even during the winter months, and joins the site’s other full-size grass pitch, junior-size pitch, grass training area and three tennis courts.

The funding has also supported the extension and remodelling of the on-site changing pavilion, to create an improved community hub building. The pavilion now includes office facilities, a learning and teaching area and community space. This is in addition to four team changing rooms, two officials’ changing rooms, a clubroom and a kitchen.

As well as being available to the local community, the site will be used by Havant Borough Council’s three partner organisations – Havant and Waterlooville Youth FC, Active Communities Network and Hawks in the Community, the charity arm of local professional club Havant and Waterlooville FC. Local club Widbrook United FC will also use the site for training and fixtures.

The Hampshire FA will use the new pitch and community hub facilities to deliver coaching and training workshops. They will also work with the football clubs to establish a new 11-a-side league. It is expected that the Council will work with its partner organisations and local community groups to set up a yearly inclusive football festival at the new sports hub. In addition, Hawks in the Community will use the site for holiday programme sessions.

Havant Borough Council worked alongside the Football Foundation and the Hampshire FA to compile a five-year Football Development Plan, which is a vision of how sport will be played on site with an emphasis on increasing participation.

It is expected that, thanks to the new facilities, the number of teams using the sports hub will rise from 30 to 79. As a result, on-site football participation across all ages is expected to rise by 401%. Active Communities Network also plans to hold multi-sport activities using the new playing surface, including netball and rugby, which supports a predicted increase of 451% in overall sport participation.

The Council worked in partnership with the Hampshire FA to secure a £923,407 grant from the Premier League & The FA Facilities Fund.

Founded in 2000, the Football Foundation is the largest sports charity in the UK funded by the Premier League, The FA and Government, via Sport England. It develops new and refurbished grassroots sports facilities in order to improve the quality and experience of playing sport at the grassroots level. Since it was launched in 2000, the Foundation has awarded around 15,000 grants worth more than £580m towards improving grassroots sport, which it has used to attract additional partnership funding of over £800m – £1.4bn of investment into the grassroots game.

Since 2000, the Football Foundation Funding Partners’ investment has provided 394 grants worth £12.8mtowards grassroots sports projects worth over £28.7m across the whole of Hampshire.

By providing more high-quality facilities, coupled with coaching at the appropriate age group, the Premier League & The FA Facilities Fund aims to improve the experience for regular players as well as attracting new players to the game. Many of the new state-of-the-art facilities will serve to strengthen the connection between professional football clubs and their local communities, particularly in the most deprived areas of the country, through the professional clubs’ community trusts’ outreach work.

Alan Mak, MP for Havant, said: “I was delighted to return to Front Lawn to open Leigh Park’s new community sports hub, having visited last year to see its development in progress. This project has been a great success, and it’s fantastic to see central Government money invested here in Havant through the Football Foundation.

“This new artificial pitch and pavilion will be a great asset to the Leigh Park area. I look forward to returning in future to see it being used. Hopefully it will help more people to get active, improving both their mental and physical health.”

Paul Thorogood, Chief Executive of the Football Foundation, said: “The Premier League & The FA Facilities Fund provides the investment necessary to improve grassroots football facilities. So, I am delighted to see Havant Borough Council join thousands of local clubs and organisations who have reaped its benefit, in this case through the opening of their community sports hub. I'd like to thank Alan Mak MP for helping with its official unveiling.

“Having delivered over £1.4bn of grassroots sports infrastructure projects, the Football Foundation has developed a network of accessible, first-class facilities in areas they will have the greatest impact – thanks to money from the Premier League, The FA and the Government via Sport England.

“These facilities are more than places to play football at, these facilities are hubs of physical activity, the bedrock of local communities and ‘homes from home’ for so many who also use them as social outlets to learn new skills, gain work experience and other qualifications.”