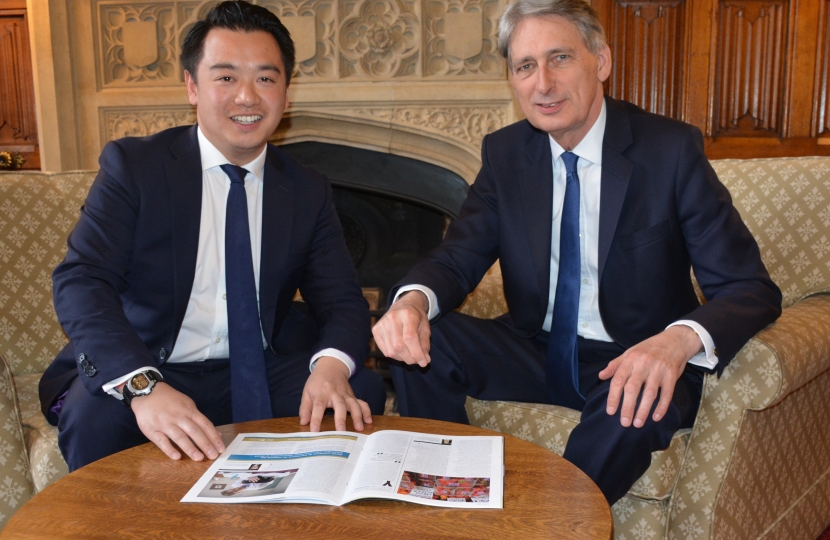 The following article was first published in The Daily Telegraph on 21 November 2017. To see the original story click here.

In tomorrow’s Budget, the Chancellor will pledge to increase Britain’s combined public and private investment in R&D to 2.4% of GDP by 2027 and to 3% in the future. This means another £80 billion for our scientists, innovators and entrepreneurs over the next decade, transforming whole sectors and creating new jobs across the country.

This is welcome investment, which I’ve called for over the last 18 months as I’ve led work in Parliament to make Britain a global leader in new technologies such as artificial intelligence, precision medicines, driverless cars and robotics. These breakthroughs herald what many term the Fourth Industrial Revolution, and are transforming economies and societies around the world.

But if Britain is to lead this new wave of innovation, turbo-charge our economy after Brexit, and ensure we squeeze every ounce of return from our R&D investment, we must acknowledge that money alone isn’t enough. We need a change of culture and mindset too.

The work of the Francis Crick Institute in central London, a gleaming symbol of Britain’s world-leading life sciences sector, reminds us about what is at stake.

Opened last year as Europe’s largest biomedical research laboratory, the £650million facility’s task is bringing new scientific breakthroughs and techniques to market. A hotbed of researchers and scientists, the Institute’s focus is commercialisation.

Since all research and innovation involves an element of risk, this means being at the cutting-edge of technologies which have sparked controversial debates, such as the development of ground-breaking gene editing techniques. For some, a potential cure for debilitating genetic diseases. For others, the thin end of the wedge towards “designer babies”. But as Sir Paul Nurse, Institute’s chief executive, recently said: “I don’t buy the ‘slippery slope’ argument, which I see as an extreme version of the Precautionary Principle — a way to stop something happening that could bring real benefits.”

The Precautionary Principle is a risk-adverse EU law enshrined in the Lisbon Treaty. It shifts the burden of proof onto innovators, often setting an impossibly high-bar when it comes to proving that a new product, technology or medicine doesn’t have any negative health implications. This can inhibit investment in research and development by either establishing an overly long and complex route to market, or banning research in a given area altogether.

The UK's life sciences industry employs nearly 500,000 people and contributes £30billion to the British economy. Holding back this sector from further growth with overly stringent regulation like the Precautionary Principle would be the wrong step for Brexit Britain’s economy. It would stifle innovation and prevent transformative medicines and treatments from coming to market.

However, regulations can and do provide important protections. Deployed sensibly, the Precautionary Principle can safeguard our health and safety, providing protection against future thalidomide scandals for example.

That’s why when we leave the EU, we should keep the Precautionary Principle – but establish a new British Innovation Principle to sit alongside and complement it. As the European Risk Forum think-tank points out, an Innovation Principle would recognise the “need to protect society and the environment” while also protecting the “ability to innovate”. This idea for a European Innovation Principle was supported by 12 CEOs of multi-national companies, who collectively invest more than €21billion a year in innovation across Europe.

In a letter to European Commission President Jean-Claude Juncker they warned that regulation was holding back European growth. “Innovation is by definition a risk taking activity. These risks need to be recognized, assessed and managed,” they added.

A new British Innovation Principle, which I have proposed the Government adopt through its Industrial Strategy to be published next Monday, would place a duty on all public-sector bodies to ensure that whenever policy or regulatory decisions are under consideration the impact on innovation as a driver for jobs and growth is addressed alongside any potential risks. Regulators must consider the potential positive benefits of new innovations for public health and social wellbeing, as new technologies can improve quality of life, not just boost the economy.

A post-Brexit Britain needs a system of risk management – not risk avoidance.

This pro-innovation approach is vital as the new technologies of the 4IR become mainstream. We have a number of fledgling 4IR industries that would be in danger of being snuffed out through over-zealous regulation.

In agriculture for example, our farmers risk becoming less competitive as the rest of the world moves ahead in the production of genetically modified crops, despite repeated scientific assessments which have concluded that GM crops are safe for humans and the environment. As the supermarket magnate Lord Sainsbury put it: “For the first time we could genetically modify plants to make them more genetically resistant to disease, more productive, more nutritious and more healthy.”

The eponymous Sainsbury Laboratory is attempting to grow blight free GM potatoes – eradicating a disease that costs the industry more than £5billion a year. A British Innovation Principle would allow these scientists the space to flourish.

Post-Brexit, let’s give British businesses the confidence to invest in new products or services, safe in the knowledge that they can commercialise without innovation being stifled. This would also attract foreign investment, incubate 4IR technologies, and incentivise R&D investment, ensuring we receive the most bang for our buck as we match the 3 per cent of GDP on R&D that our competitors like South Korea and Germany already achieve.

To make a success of the British Innovation Principle, Government must play its part by establishing an Innovation Commission tasked with scrutinising public policy and regulations to determine their impact on innovation and test the balance between risk and reward. An existing body such as the Better Regulation Executive could also have its remit extended to cover this too.

An independent Commission would ease the fears of environmentalists, and prove that Britain is still committed to the environmental protections secured by the Precautionary Principle as set out in the Rio Declaration. We mustn’t let the Innovation Principle become a backdoor for lowering standards, but adding it to our statute book after Brexit lays the foundation for a turbo-charged economy.

Britain is home to some of the world’s best engineers, scientific institutions, and entrepreneurs. Only by embracing a new Innovation Principle alongside sustained investment can we help them turbo charge Britain’s economy.