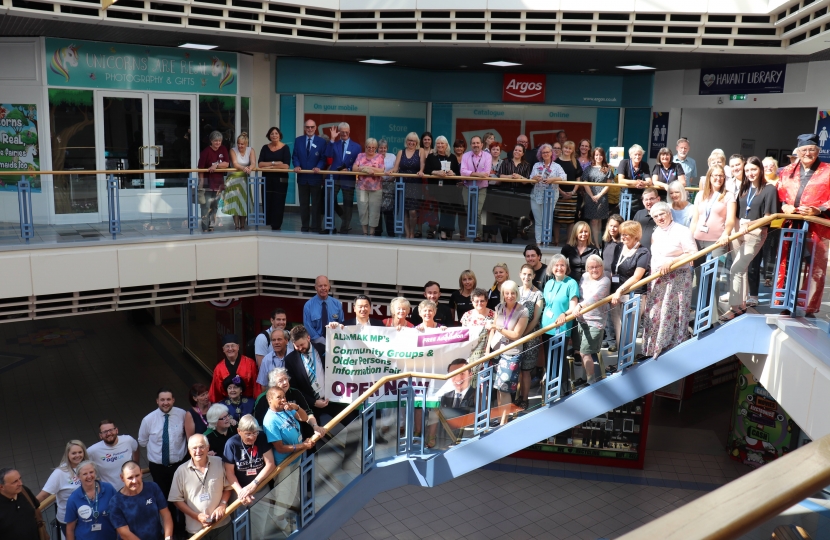 There was a record breaking turnout for the fourth Community Information Fair at the Meridian Centre in Havant, organised by Havant MP Alan Mak.

More than one thousand residents attended the event with around 50 exhibitors displaying information about local groups and organisations that support senior citizens.

Alan said that he was “delighted” by the positive feedback from the residents that attended, hailing it as his best Community Fair yet.

He said: “There was a wonderful response from residents, many of whom have signed-up for the various organisations that exhibited on the day. The community groups that exhibited are part of the fabric of our vibrant constituency. From the Women’s Institute and the Trefoil Guild to the Hayling Island Choir and it was an  excellent day to show off our best community groups”.

“For those who were unable to come on the day, visit my website where information about all of the exhibitors can be found. All of the organisations that came are friendly and looking for more members or supporters, so I encourage all residents to get involved.”

Dave McVittie from the Solent Male Voice Choir praised Alan for organising the event and said that they had a number of residents interested in signing-up.

He said: “We thought it was well organised and we met a great number of prospective new members as well making a wider audience aware of the Solent Male Voice Choir. We came away from the event feeling we will soon be welcoming new members.”